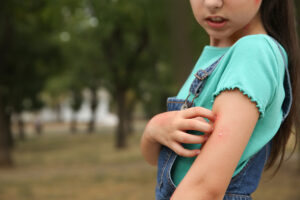 Nothing can spoil an outdoor adventure quite like a painful bug bite. Even so, most insect stings can be safely and easily treated at home. Just be sure to watch for signs of a severe allergic reaction—such as hives, a weak pulse, difficulty breathing, and a swollen tongue or throat—and seek emergency medical attention if necessary. Also, if you have a known allergy to insect stings, use your epinephrine injector immediately after you’ve been stung.

The most common types of insect stings are bee and wasp stings, which are similar in many ways. Both can cause an itchy red welt to develop at the puncture site where the insect injected its venom, along with a painful burning sensation and minor swelling. However, when a bee stings, it will leave behind its barbed stinger in your skin, and the bee will die. On the other hand, a wasp is capable of stinging multiple times in the same place—and will usually do so until it is shooed away.

If you’ve been stung by a bee, you’ll need to remove the stinger and the attached venom sac. Use your fingernail or a credit card to gently scrape it away. Don’t use tweezers, as they can push more venom into the sting site.

To treat both types of insect stings, thoroughly wash the sting site with soap and water. Then, apply a cold pack to ease the pain and swelling, which should subside within a few hours. If needed, you can also take an over-the-counter nonsteroidal anti-inflammatory drug (NSAID) or an antihistamine to further reduce the pain and swelling, and apply hydrocortisone cream to relieve the itching.

If you need help removing a bee stinger or would like to receive professional medical attention for non-emergency insect sting symptoms, turn to VitalMed Urgent Care. Our walk-in clinics in Laredo, TX, are open every day during extended hours.

We Are Open Near You

If you need non-emergency urgent care, skip the ER and come to VitalMed instead. You can register for an appointment online or simply stop by one of our conveniently located walk-in clinics in the Laredo, TX, area, where you will be promptly seen by an experienced medical provider.

VitalMed is Here When You Need Us

WHAT OUR CLIENTS ARE SAYING
Prev
Next
Ana Hernandez

Always outstanding service from VitalMed! FNP Neira has always treated my family and myself with 100% loving care. Their new online booking Solv cuts down on wait time and lets you register from the comfort of your home. 10/10 recommend!! Go to Urgent care!!

Great service and personal attention... Clinic is very nice and clean. Personnel from office to the medical professionals were very attentive and addressed all my concerns. Thank you!

Excellent staff and great care, couldn't ask for better care.. I was in the nursing field for 18 years and I would recommend this clinic to everyone I know.

Very friendly staff and very efficient! I went in and got seen within 10 minutes. Dr listened to my needs and attended. Very satisfied

Wonderful service! Everything was clean. The staff was courteous and professional. The wait time was short. Love the App that’s available so that patients can “check-in” and get in line at home. Highly recommend.

Read All Reviews
Why VitalMed?

Since our founding in 2015, VitalMed has set the gold standard for non-emergency urgent care in the Laredo, TX, community. Our medical providers take great pride in making the lives of local individuals, families, employers and employees a bit easier. In non-life-threatening situations, we are a convenient and cost-effective alternative to an ER. 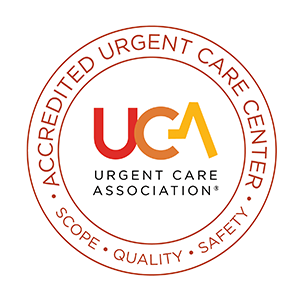